Just for a moment, think about how your organization would change if there were no volunteers. What would that landscape look like?

It goes without saying that volunteers help in so many ways, from internal operations to implementation of services. You know the time they donate is precious, but volunteer value may be higher than you think.

In fact, the latest report from Independent Sector, an organization that advocates for nonprofits, finds that the average volunteer value of a hour is now at an all-time high of $23.07 (2014 data). That’s an increase of 52 cents over 2013’s estimate. It’s impressive to see the continued rise, especially when one considers that the average volunteer hour value was worth only $16.00 in 2001.

In this post, we’ll dive deeper into the data and offer a few suggestions for engaging volunteers.

Although the work volunteers do is priceless, the Independent Sector research helps us quantify what their time is worth on a large scale. The calculations are staggering. When one considers that over a quarter of Americans (62.6 million) volunteered over 7.7 billion hours in 2013, that translates to a total value of $173 billion dollars nationwide. These statistics are often used by nonprofits during volunteer recognition events or when demonstrating the level of support they receive from the public. The numbers also play an important role in grant reporting.

Putting the Value to Work

So, what’s the best way to maximize that $23.07 per hour in your own organization? Here are a few ideas:

Skills-Based Volunteerism: For-profit businesses are more aware of corporate citizenship than ever before. As such, companies are creating greater impact by working through third-party organizations that match an employee’s skills with nonprofits that can benefit. Learn more about skills-based volunteerism at the Corporation of National and Community Service’s website.

Engage Baby Boomers: The men and women who are retiring right now are active and wanting to stay busy. Why not try reaching out to senior centers and AARP to connect with them? Baby Boomers bring great value to organizations, as studies show they are not just wanting to sit around and stuff envelopes. Many are well-educated and have had successful careers. They possess valuable skill sets to offer your organization. Also, don’t forget their leadership qualities. Do you have a new initiative you’ve been wanting to try? A capable Baby Boomer may be just the person to spearhead the project.

Grant Writing and Fundraising: Do you have certain volunteers who have a knack with the written word or are great with people? Approach them with opportunities for writing grants or helping with your next charity drive. Odds are you will not only be receiving the benefit of their time at $23.00 per hour, but you will see an even greater return on that number.

Networking: If your organization doesn’t already belong to the local chamber of commerce and other local professional groups, it pays to check into them. Once you have relationships established throughout the community, it becomes easier to approach either individuals or civic groups for volunteer opportunities. So, instead of hunting up a repairman for a problem in the office, you may be able to get the job done without charge from a fellow group member. Or if you need entertainment for an event, instead of having to pay for it, perhaps a tie you’ve made within the community will be all you need to get the job done gratis.

Automated Volunteer Management: The volunteer value of an hour is diluted as the amount of time a staff member spends registering volunteers and reminding them of upcoming events increases. VolunteerHub increases the worth of both staff and volunteer time through online registration, automated emails and texts, and much more.

These are just a few ways to maximize the impact of a volunteer hour. How does your organization get the most value from the time your volunteers donate? 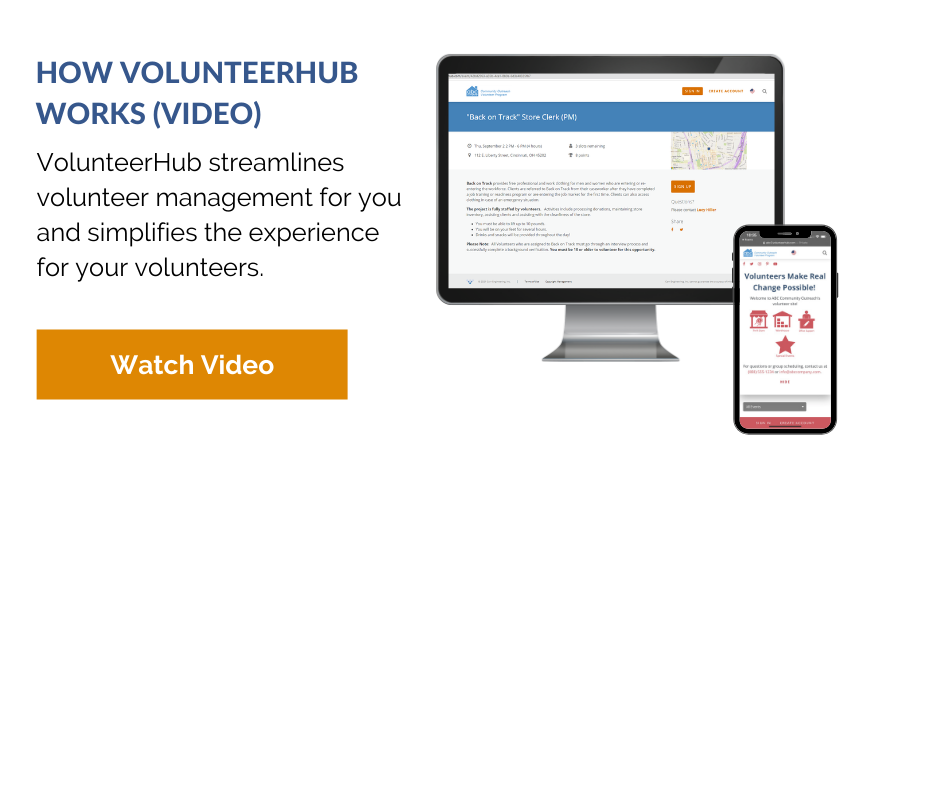